Short films are proven avenues for young filmmakers to experiment and figure out their voice and style. The financial and logistical hindrances commonly associated with the form are intended to bring out the genius in filmmakers, and prepare them for the more regimented culture that comes with bigger projects and investor involvement in future. For Ikem Okeke, Husbandry, his debut short film, was his first dance as a filmmaker. It allowed him to play with all he’d learnt and more. Filmkaku had a chat with the young filmmaker.

Filmkaku: To start off, could you introduce us to your background and your work?

Ikem Okeke: I was born and raised in Nigeria, but I moved to New Jersey for University. I grew up watching big Hollywood superhero/fantasy movies and the types my mother liked — Classic Nollywood movies and American thrillers. My true love for film came when I was about 14. I watched Martin Scorsese’s Goodfellas and Raging Bull, and my outlook on what films could be completely changed. I started watching the films his colleagues made and the films that inspired their generation. Since then, I’ve really come to appreciate film as more than entertainment

IO: I wrote Husbandry in 2019. I wanted to work on a short film with my friends and family so I chose subjects and themes we were all familiar with and that we could pull off while we were all in Lagos. The idea was to take basic Nollywood plot elements and fuse them with my own ideas and style.

FK: How did you come to realize the narrative and emotional potential of working with these themes?

IO: I feel like two go hand in hand. I think almost any plot can be effective when the director has emotional themes they want to explore. In Husbandry, the key feeling was Chinelo’s desperation and her sense of insecurity. So while the main plot isn’t a particularly common experience, the characters’ motivations aren’t difficult to sympathize with

FK: Can you describe the writing process?

IO: A key element that drove me during the writing process was the idea of a mother and daughter having opposing feelings about the kind of man their husband/father was.  How a familiar person can be familiar in different ways.

FK: Were there any specific challenges you faced while writing?

IO: The writing process was rather straightforward, which was a first for me. I had lots of friends and family who gave me meaningful input. Their interest alone really motivated me. The real challenges came during production. We were unable to secure most locations until the actual shooting days, so sets couldn’t be designed as I had wanted. Luckily my cinematographer, Chibuzo Akpe; my producer, Ebube Umeano; and I were able to brainstorm and make the most of what was available to us.

FK: Who and what were some of your key inspirations for the film, both thematically and visually?

IO: Ari Aster’s family trauma approach to horror was certainly an influence on the plot. I’m a big David Lynch fan and I had watched Twin Peaks and Lost Highway a couple of times before production started, so his unique language was always at the back of my mind. Themes from Bong Joon Ho’s “Mother” were also an influence

FK: These are interesting themes. Was there a specific time in your life that was most crucial to shaping your love of cinema?

IO: My friends and I really got into cinema around 2015. We torrented Oscar nominated movies like Whiplash, Birdman, Grand Budapest Hotel etc. We also watched older Scorsese movies during that time. We were so blown away by how different these films were from the “mainstream” stuff we were used to seeing. We kind of formed a little clique of film bros that thought we had better taste than the rest of our classmates. Watching those movies with friends, discussing, recreating the scenes, and studying the influences of our new favorite directors deepened our bond and really opened my heart to cinema. From watching more and more movies during that period I really realized how much more there was for me to learn about cinema as an art form and a culture.

FK: Can you talk about working with your DP to create the look of this film?

IO: Chibuzo and I watch a lot of the same movies so we had a lot of similar ideas going in. We knew we’d be working with a DSLR (canon EOS 80D) so we had some limitations to our shot design and we had to be resourceful to set up shots that seem straightforward. We started by reading through a scene together, discussing what emotions or feelings arose, and then choosing shots and angles that reflected those feelings. I did storyboard some key scenes. Whenever we could, we would practice camera movements and placements for hours at a time the day before shooting. His technical knowledge is a lot more advanced than mine, which was a relief for me. I could make a sketch or describe a particular look I wanted and he’d understand and translate those into appropriate camera settings. Like I said, our location planning wasn’t the best, so we couldn’t always do what we wanted. For example, the scene where Chinelo interrogates Mmeli was meant to be done indoors in a study, but there was no electricity that day. Chibuzo’s resourcefulness helped us quickly set up the location and get the best out of that scene

IO: I put out casting call posters on Twitter and Instagram for all the roles. Even though the role of Claire was listed, I contacted Funmbi Toye directly. I had seen her work in other short films and plays and I knew she could give Claire the attitude I wanted her to have. She sent in a couple of audition videos and I knew she was the one. Apart from her magic on set, she was dedicated to her role and was genuinely excited about the project. Chinelo was harder to cast. Not many audition tapes came in and at a point I didn’t think the film could be made. A few months before production was to start, my mom reminded me that Uloma Umeano, my fried Ebube’s mom, used to act on TV in the 90s. I asked him to talk to her. She was a bit reluctant because of her busy schedule, and because she hadn’t worked on a film in several years. After weeks of begging and nagging, she agreed to do it and the project started to come to life. Working with Uloma was rather emotional. She reminded me every day how proud she was of her son and his friends for working together on a film project and I, in turn, gave her the confidence and encouragement to bring out her natural talent. She and Funmbi had fantastic chemistry and worked really well together on set to portray the dynamic between Chinelo and Claire

FK: This is good. What has the response to the film been like?

IO: It’s been mostly positive, though I’m aware that I’m not nearly at that level where people can openly voice their negative reactions or even discuss the film thoroughly. Husbandry didn’t reach a wide audience, but I think most of the young Nigerian people that saw it for what it was appreciated what the cast and crew did. Hopefully I’ll be able to push the film to other audiences, and my next film will engage more people.

FK: Can you tell me a little bit about the projects you’re working on now or next

IO: I’m working on a screenplay about male friendships between Nigerians and Nigerian-Americans in the city of Newark, New Jersey. I’d like to film it next year if possible. I might also work on music videos for some emerging talent

FK: Wish you all the best 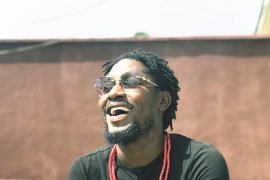 Diji Aderogba and the Beauties of Collaboration
Tunde Olaoye’s Advice To Young Filmmakers Looking to Break In.