Since its inception, Nollywood’s image has been embodied by splashy melodrama and vibrant exploitation flicks. But a closer look into the Nollywood expansion into global relevance reveals a new wave on the horizon, one brimming with new possibilities as it questions the choices of old.

Below, I expand on the examination of a similarly titled thread I shared on Twitter:

The 70s-80s are regarded as the Golden Era of Nigerian Filmmaking and for good reason too. We had about 300 theatres, popular literature adaptations, technical excellence, and high story craft. We had films made by masters like Oladele, Adu, Ogunde, Olaiya, Balogun, Ugbomah, Afolayan, and so on. Notably, these masters were, by training, theatre practitioners and as such, their films retained a certain air of theatricality in performances and were generally unlike the art-house film sensibilities already emergent in francophone African cinema (Touki Bouki, Mandabi, Yeelen). Sadly, most of the films made in this era cannot be accessed or found for research purposes. It is fitting to regard this period as the beginnings of Nigerian filmmaking and hence the First Wave.

Why and how the Nigerian VHS /VCD era emerged is well documented already. With pioneers such as Alade Aromire & Kenneth Nnebue experimenting with the technology and distribution style that eventually became Nollywood, an evolution was quickly in full force. Characterized by low budgets, low production values, and straight to video distribution, these films became very popular even with the obvious technical and story drawbacks. As a result, the tastes and expectations of audiences at the time were reconstructed and reevaluated to fit in with the video aesthetic and the often-exploitative melodramas of the time. This continued apace with the growth and popularity of local television dramas. This period can be referred to as the Second Wave.

Kunle Afolayan’s Irapada (2006), after screening at the Silverbird Cinemas, signified a gradual return of Nigerian films to the cinemas. This event pioneered a new Nollywood age— the third wave. The cinemas gradually opened up the industry to better profits and drastically hindered the activities of notorious film marketers and pirates, hence, leading to greater investments in production values and technical training. For many, the “cinema” films of the third wave are a drastic improvement from the second wave and have revived the cinema-going culture across the major cities in the country, with box office hits like Figurine, The Wedding Party, Merry Men, Isoken, Sugar Rush, Omo Ghetto. Filmmakers like Kenneth Gyang, Damilola Orimogunje, Ema Edosio, Chuko and Arie Esiri, Akin Omotosho, and the Surreal 16 Collective have continued to expand the oeuvre of the Nigerian cinema audience and are finding international critical attention in the process via film festivals. Nollywood is growing fast. Bigger Films, Bigger Budgets, Global attention.

While celebrations continue about the successes of the current wave, keen critics and commentators within Nollywood believe that there’s a serious potential to do much better. With the possibilities now present, success must go beyond the rare box office success. The focus must go beyond the superficial glitz into the core of the franchise itself— craft, competency, and a larger commitment to story development. This conversation, though whispered in closed spaces, has brought into relevance the place and function of film criticism, but has been met with uneasiness and conflict. Debates rage on what the future of Nollywood and Nigerian Film can and should be. Art vs Commerce? Commercial vs Critical? Flawed hypotheses or not, these conversations are a vital part of a market transitioning to a proper industry. Perhaps, an invitation to a fourth wave?

I speak about the fourth wave because it certainly feels like we’re on the cusp of one. The global gaze is firmly upon us. The big streamers are in town and are providing a higher technical base, more investments and expansion, democratization of choices, and accessibility to a large pool of films from all over the world. These have led to audience expectations & tastes evolving and their demand for a certain level of quality. In addition, Nigeria is in the middle of a techno-cultural boom. Our music is at the top of the global charts and is the primary exporter of our rich culture. It certainly feels like it is time for Nollywood to participate correctly; not simply as a conveyor belt of crude, defiantly produced low-budget films, but of commercially and critically successful films that can be appreciated anywhere in the world. These expectations are real and the implications of those expectations are already emerging— production value & technical excellence are no longer a draw but are expected givens. Film literacy is on the rise as film festivals, clubs and collectives are emerging across the major cities. One demand continues to be the preoccupation— Story Excellence

The fourth wave will be solely about story craft as it will play to both local and international audiences that transact with the currency of any experience-seeking collective— storytelling.  From India to Iran, South Africa to Senegal, South Korea to Spain, we are all thirsty for new experiences and we will express our love and appreciation when we do come intact with an experience that speaks to us. The bigger Nollywood gets, the greater the talent that flows in, either from the diaspora or from home. With this, we are guaranteed to be blessed with a proliferation of voices. Audiences will have more options either way and will demand respect for their time and resources.

To myself and my friends, it’s time to get better. There is no hiding place for the poorly developed plots and characters, tired themes, and aesthetics that have characterized our film tradition and enterprise. We can be better and we should be better, for our own sakes. The fourth wave is nearly upon us. 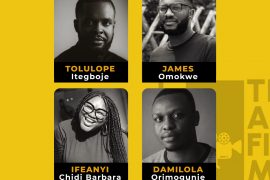